Rukha (Wangdue) – Eleven years ago, today, I landed in this village, with officials from Tarayana Foundation. My job was to visually document this village and its way of life as forces of modernization eventually took over. That was my assignment. Nothing more. I later produced a documentary titled, “People of Darkness”.

It was a two-day trek – braving landslides, heat strokes, leeches, cobras, leopards – going through some of the harshest terrains and jungles. However, if the journey was a killer, what I saw there was even worse.

The place was in terrible condition. Something that I had not seen anywhere in Bhutan. People living in empty and makeshift bamboo sheds. Little children, most of them barefooted with just one set of cloths they had on, playing in the dirts. There was no water to farm. Other modern amenities like electricity that we take for granted, was not even heard of. The land was almost fallow. Of the 18 households only three had barely something to eat. Many were going hungry. I had seen poverty elsewhere but not misery. Here was one. It was as if God had forgotten this people. The place was lifeless.

I was shocked. I was sad. I was angry. Although I had just resigned from BBS and didn’t even have a job, then and there I made a wish, “For each day that I live from this day, may I be able to help this people out of this hell”.

Back in Thimphu, I shared my prayer at the Tarayana annual dinner where Her Majesty Ashi Dorji Wangmo (the Patron) was extremely pleased. I signed up as a volunteer for Tarayana. And then together with Sonam Pem – project officer, and Passang Tobgay – the field officer, and with rock-solid support from Chimi Payden, the head of the foundation, (actually Passang and Sonam did most of the work. I just provided some essential back ups and occasional views), and together with the people of Rukha, who started believing in themselves, we took off. Step by step. Building one house at a time; sending children to school and providing non-formal education for those who have been left back; water, hygiene lessons, seeds distribution, fishery ponds, nutrition classes, farming tools, solar electricity. And above all, giving love and care that this vulnerable community badly needed. They just wanted someone on whom they could say, he or she would there for us. They found that in Tarayana.

In few years, life slowly came back to this village. Ten year since, it is one of the few villages in Bhutan that is self-sufficient in food, and the overall life is pretty decent. “Now we only buy tsha-tshotor” (salt and oil), says Chokila, who played the chairman of the village project committee to help Passang, who was stationed there. Now these people gift me with rice, cheese, smoked fish and fruits when I go to visit them.

Moral of the story – If Rukha can become self-sufficient in less than ten years, I am sure our country can. We just need to work together. But that is too difficult to ask, I know. Two Bhutanese put together will have three opinions, these days.

Anyway, what has remained from this decade of engagement? Tarayana project closed in 2011-12. But I stayed on to help build a community temple – again together with the people, who did most of the work. The full story is blogged here. Their life has changed forever, for sure. Some challenges remain but people are generally content. And so am I. It has been a wonderful journey – a life-changing one for me that led me to find contentment and terrific sense of fulfilment.

If there is one valuable lesson that I learnt from this experience, it is that you can do a lot with very little. People talk of money and resources. Yes, money and resources are important and they make life easier but sometimes it is more than that. But you got to be there – giving your time, heart and your ears, so that people will feel loved and cared for. I applied the same approach thereafter in many aspects of my professional and personal life – with fair amount of good results, I must say.

I would like to raise and establish a trust fund to organise an annual Baza Guru Doongdrub (collective prayer ceremony) for perpetuity. However, it won’t be just for Rukha but also involving the whole valley that includes Samthang, Lawa and Lamga, where I have worked and in fact where I am as welcome – if not more.

Imagine a week or fortnight of togetherness in prayers and contemplation – in absolute isolation from mobile phones and materialistic thoughts. In that beautiful valley. In other words, this valley will become, not only a self-sufficient valley but also the first contentment valley in Bhutan. This is my vision. This is what GNH stands for me – contentment. Happiness, we know, is subjective – and it has been elusive too. Lasting happiness is what we all seek and never find. Contentment can be. And lasting happiness is known as contentment.

May all of you find contentment. 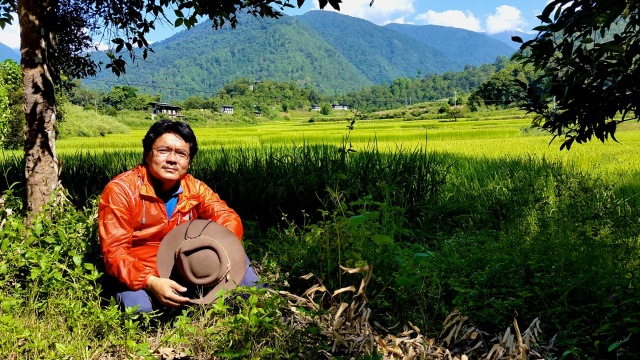 There are ways to get there
If you care enough for the living
Make a little space
Make a better place
….
….
….
From the song, Heal the world, by Michael Jackson

One thought on “Myths, memories and contentment”